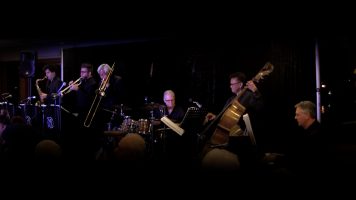 We recorded the A Players as part of the Bill A. Jones concert we captured for Celebrating Act 2™. Band leader Paul McDonald has the six musicians sounding like a classic big band — perfect for Bill A. Jones singing the great standards. But they are a fantastic band in their own right as you will see here. This number sounded so familiar but we couldn’t place it. Turns out it is a well loved jazz classic called “At The Mambo Inn” from 1953. It’s probably familiar because it has been recorded so many times by greats such as Count Basie, George Shearing and others. Paul McDonald has put his own twist on it and I guarantee you won’t be able to get it out of your head!

Scroll back to top