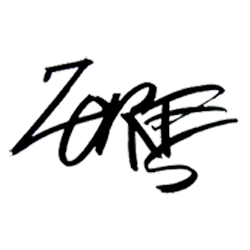 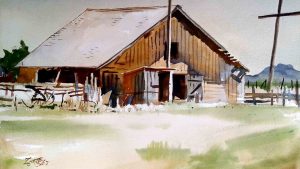 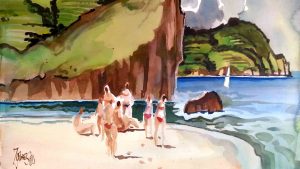 Milford Zornes’ first 22 years of life is about a kid who really had no direction.

He had learned to draw because his mother said ‘here, take this pencil and go draw a picture’ because he’s on the farm with his sister and he has nothing to do.  It keeps him busy.  He gets pretty good at it.

His father was a farmer in Oklahoma and not doing well. The family moved to Idaho, then California to make a go of it. This is after WWI but just before the Depression. It may have been the roaring twenties in New York and the big cities, but he was a farm kid. These were not the roaring twenties for him, and he needs money. These were tough times. His was a hard-scrabble life and he had a wanderlust.

He was a big, burly kid, six foot something or other, so he could work hard. But he’s got no direction.  So he ends up working on farms, on survey crews, even selling photographs to magazine publishers. Besides getting work, he wants adventure—to travel. Word was anyone could get a job on a ship. So he hitchhikes across the country to the East coast and winds up getting a job as an ordinary seaman because it was available. The ship heads to Europe but he quickly learns to hate the life of a seaman. When they land he jumps ship even though he was supposed to work on the return trip. With less than half his pay he hitchhikes around Europe and goes to the Louvre in Paris. He's impressed by all the famous artwork, and has an obvious liking for painting, but he has no training for this and doesn’t envision how he could make a living painting.

To get home he takes another job on a freighter. On the way back from Europe he ends up in the belly of the engine room. Zornes finds himself scrapping the bottom of the boiler, and he says ‘I’ve got to do something, I don’t want to do this.’ Lying under the boiler, doing the lousiest job imaginable, he looks over and sees the guy stoking the coals. It's a dramatic image —a sweaty workman highlighted by flames from the firebox, and he says to himself, ‘that would make a great picture.’ It's then that he realizes that maybe—just maybe— he could be an artist.

Back in the US, he visits museums and galleries in New York and then heads back to his family in California. He spends two or three years bouncing between junior colleges to study painting while working to survive. He does three months here, six months there, but he can’t settle down. He's not much of a student—not that he was stupid— but he didn’t have any study skills and he felt out of place. After all, he was two or three years older than the other students and had spent that time seeing the world and maturing. He also didn’t have the academic training, or the discipline to sit down in one place, to lear.  And he had yet to find one other important thing—an inspirational teacher.

At some point he ends up in Pasadena, seeing a painting by Millard Sheets, and he says ‘wow, this is great. This is what I want to do.’  Then he attends Otis Art Institute for a while and when his father buys an orange grove East of Los Angeles in Pomona, he applies to Pomona College in Claremont. Just across the street, Millard Sheets is teaching at Scripps College. After taking a class with Sheets, Zornes jumps ship from Pomona and enrolls in Scripps, joining Sheets and an ambitious crew of students working under him. Sheets is only a year older than Zornes but a mentor to this cabal of young talent.

That’s when he really starts his academic career, studying under Millard Sheets—and making up for lost time. Besides learning a lot from Sheets, the students are like a club; friendly with a common passion and yet very competitive. Under Sheets' guidance they share, experiment and push each other to excel. They often work in watercolor. It's cheaper and they are enduring the Great Depression. Obviously, Zornes has talent and with training he thrives in this atmosphere.

One important factor in his growth is that he met another guy his own age, Tom Craig, with whom he hits it off.  Craig was a model student and it rubbed off on Zornes. The two buddies, inspired by Sheets, travel all around southern California to paint— from the orange groves to the mountains to Laguna Beach. As they paint they talk about art and painting and immerse themselves in the culture of painting. They and their fellow students become part of the American art scene.

For the next three to four years Zornes really develops into a painter. He and Craig and their friends —all the former students of Millard Sheets— are painting constantly, entering shows and winning prizes, meeting other artists, comparing notes and growing into professionals. Zornes, at first worried that he is merely copying Sheets, develops his own style. By 1933 he already has a reputation. He and the others are nationally recognized as a school, dubbed the "California Scene" painters. They capture life in California as they see it.

So here was a kid who came from out of nowhere, with no formal training, to become a full time artist who could actually make a living at it. That is a major accomplishment, especially in the Great Depression. In 1935 he gets married and has a son. He is painting, teaching and prolific. He is driven to constantly produce. Years later Zornes will be recognized as one of the most prolific painters of the WPA.

Millard Sheets is not only their ex-instructor, he is a friend, an entrepreneur and mover and shaker in the art world. He gets commercial commissions such as a series of large frescos to decorate the outside of 30 banks, for the Home Savings of America. Sheets hires his friends and former students to execute the projects.

So, in the span of ten years, 1930 to 1940, he had not only become an accomplished academic, he had learned to paint, joined major professional societies, won awards, and got recognition as a member of an avant-garde movement.

In 1942 he gets married for a second time. And then the war changed everything….

Drafted into the Army as a buck private, Zornes was surprised after boot camp when he was pulled aside, given Sergeant stripes and told he was going to be one of only 42 artists in the U.S. Army. ‘Combat artists’ they were called and he was going to be sent to the China-Burma-India theater in the far East.

Here are some videos about this amazing artist.  https://www.youtube.com/results?search_query=zornesfilm