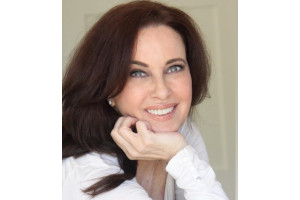 Clarissa Burt’s journey to entrepreneur – TV/Video producer, public speaker, author, writer, inventor, award-Winning actress and entertainer has all the makings of a best selling novel. At 18, Clarissa was a top model with the Wilhelmina modeling agency in Manhattan. Soon after she moved to Milan and quickly began appearing on hundreds of magazine covers such as Harper’s Bazaar, Vogue, and Cosmopolitan as well as on most of the major runway shows in Milan, Paris, New York, and Japan. This led to work for cosmetic houses Revlon, Dior, Helena Rubenstein and her selection as the worldwide “Face” for Orlane Cosmetics. Clarissa has performed in numerous movies and can be remembered as Xayide in “The Never Ending Story, part II,” and as Giulia in the award-winning “Caruso Pascoski.” Clarissa has also appeared on hundreds of television shows, and in 1999 founded her television production company, Numen International in Rome. Her productions have included The Miss Universe Pageant and World Sports Awards. In 2001, the Clarissa Burt Hair Product and Facial Cream Lines were successfully launched on Home Shopping Network Italy. A leading authority on beauty, image, and self-esteem, “Good Morning, Italy” called upon Clarissa to host the popular beauty segment, “Clarissa Suggests. After 25 years in Europe, this who’s who of American and International women returned to the United States where she hosted her own radio show entitled “Clarissa Burt talks” on voice America and world talk radio interviewing renown entrepreneurs and thought leaders. Runway Beauty magazine brought Clarissa on board As Health and Beauty Editor for their 2008 launch. She is currently launching ClarissaBurt.TV …The Look Good, Feel Good, Be Good Television for women. Clarissa’s mission is, and always will be the betterment of women.